Turkish scientists and engineers working at Süleyman Demirel University produced intra-articular injections that prevent cartilage damage in the biosurgery-themed company they founded in 2019 with 100 percent domestic capital. Thanks to the products, the process of the patient to the prosthesis is delayed up to 4 years, and with the right physician control, he knows that it can never be worn. The General Manager of the company, Prof. Dr. Serdar Sezer said that they aim to create a Turkish brand in the field of biosurgery in the world, and that they have signed agreements with 30 countries in 2 years.

General Manager of Semical Biosurgery, which was opened in Isparta Süleyman Demirel University Technopolis 2 years ago and works in the field of biosurgery, called the medicine of the future, Prof. Dr. Serdar Sezer stated that they aim to create a Turkish brand in the field of biosurgery in the world and emphasized that they produce intra-articular injections for the knee locally.

Explaining that they developed 11 projects in 2 years and produced many products, Prof. Dr. Sezer stated that they launched 3 new products by opening a stand at Expomed Eurasia, which is considered the most important fair of the Eurasia region in the field of medical devices, medical equipment and health.
Stating that they aim to raise awareness in the field of biosurgery in Turkey, Prof. Dr. Sezer said, “All 3 of our products attracted a lot of attention in the Turkish and European markets. We are carrying out 11 different projects, we will continue to introduce our pioneering product groups in Turkey, the first in the world. At the fair, we introduce products in the fields of orthopedics, general surgery and medical aesthetics. As Turkey is the health base of the Middle East, physicians are highly professional. We met with representatives of more than 30 countries in the first 2 days of the fair. Successes also provide us with significant advantages as a company.” 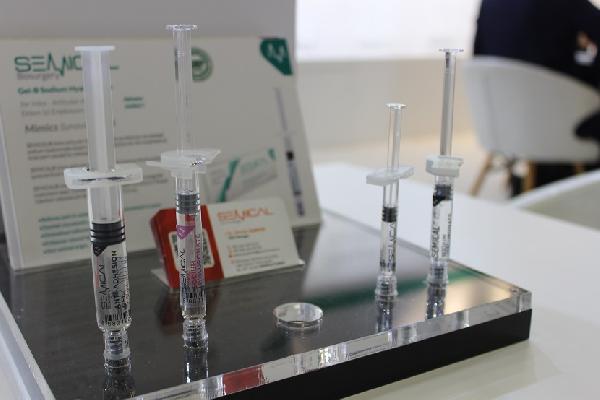 prof. Dr. Sezer said, “Our physicians use our product in the field of orthopedics for the treatment of knee pain, which is popularly known as knee fluid. We export this product to more than 30 countries. The biosurgery market in the world is 22.5 billion dollars, a very new concept. This awareness has gradually reached a good level in our country,” he said.

DAMAGED TISSUE REGENERATES THEIR SELF

Explaining that they have developed products for the self-renewal of the damaged tissues of the patient, with the combination of biomaterial and cell technologies, without the need for any implantation, without any drug content, for tissue damage caused by diseases or trauma. Dr. Sezer said, “Maybe in the future, there will be no need for prostheses in knee operations and cartilage abrasions. There are very important works in this direction. With the working group we have formed with scientists in our country, we care about being at the same standard as the developed countries of the world in this field.”

EXTENDS TIME TO PROSTHESIS UP TO 4 YEARS

prof. Dr. Sezer said, “The last resort due to cartilage wear in the knee is wearing a prosthesis. Before going to the prosthetic fitting process, we give it to your body to prevent the decrease of knee fluid with lubricating properties to stop the wear. Knee injections, viscosupplements, extend the patient’s time to prosthesis by 3-4 years. With the right physician control, maybe the prosthesis is not worn at all.”

GOAL FOR 2023: TO BE THE LEADER OF THE TURKISH MARKET AND ONE OF THE TOP 3 COMPANIES IN EUROPE

Defining medical aesthetics as an indispensable fact of the age, Prof. Dr. Serdar Sezer said, “Everyone wants to feel good. We introduced the product called dermal filler to the market for the first time in Turkey. Although we are in the pandemic period, we signed export agreements with 18 new countries. We foresee to be the leader of the Turkish market and one of the top 3 companies in Europe in 2023”.

Stating that the products have an annual usage area of ​​nearly 1 million in Turkey, Prof. Dr. Sezer said, “It is one of the preferences of every physician in orthopedics. We are one of the top 3 brands in Turkey. It is used abroad in Germany, Romania, England and France. We have a wide dealership network in the Middle East. We do not issue an equivalent product of another company. We offer our own technology solutions with our R&D infrastructure.”