Astronomers have released the first image of the out-of-control Long March 5B rocket in orbit in China, which alarmed the world.

“The sky was incredibly bright,” says Italian astronomer Gianluca Masi, who managed to view the image of the rocket, which is 700 km from Earth, with the ‘Elena’ robotic telescope. These conditions made imaging extremely difficult. But viewing the rocket was successful thanks to our robotic telescope. “This is an event that demonstrates the incredible ability of our robotics facility to track objects in the sky.”

The Long March 5B rocket carrying the main module of China’s space station successfully took off from the island of Hainan on April 29, and the rocket broke out of control in space. It is estimated that the rocket rotating around the Earth at a speed of 27 thousand 600 kilometers per hour will pass through the atmosphere and fall to the Earth at the weekend. It has been announced that the rocket is expected to fall to the earth between May 8-10. Mike Howard, a spokesperson for the US Department of Defense (Pentagon), stated that the point on the earth the rocket will land on can be predicted only a few hours before the crash. 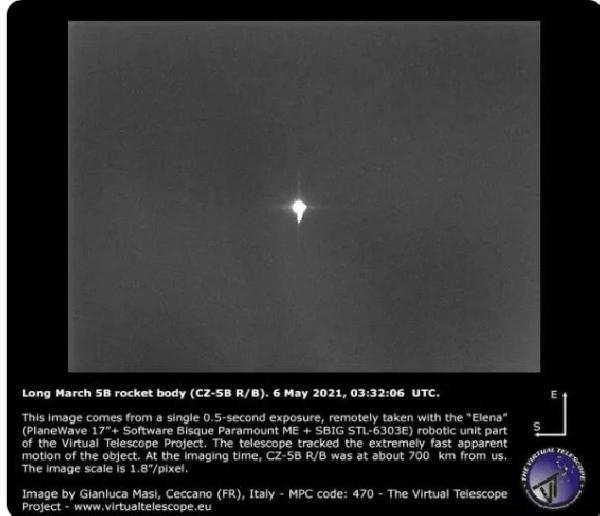