Fatih Dönmez, Minister of Energy and Natural Resources, stated that they received record applications for the Renewable Resource Areas (YEKA) GES-3 competition and said, “We received 709 applications for 74 competitions to be held in 36 cities. It will also prepare the ground, “he said.

Dönmez Minister, in his written statement, to renew Turkey’s energy, renewable source of energy basket more new projects in all areas to diversify reported that they had implemented resolutely. Stating that they added 4,900 megawatts (MW) installed power, all of which are renewable sources, to the system in 2020, Dönmez said, “We continued this great success with records in 2021. “We broke a record,” he said.

‘WE HAVE RECEIVED 709 APPLICATIONS’

Minister Dönmez stated that they have taken giant steps in clean energy with exemplary YEKA projects all over the world, and said:

“We are moving towards a new competition in our YEKA projects, which broke a great ground not only in terms of electricity generation, but also on the condition of being local in energy technologies. Our YEKA GES-3, or Mini YEKA competition, with a total power of 1000 MW, will turn the sun of Anatolia into energy. Our project, which will turn the suns of 36 cities into energy with capacities, will meet the electricity needs of 1 million 230 thousand households. We received 709 applications for 74 competitions to be held in the city, all of which correspond to the power of 9440 MW. While Aksaray received the most applications with 65 applications, Burdur received 33 applications and Nevşehir received 31 applications. We have made an important step towards achieving our goal. National energy v With our e-mining policy, our goal of more domestic and more renewable energy is realized with records, domestic technology breakthroughs and high competition. With Mini YEKA, as the sun shines in 36 cities, it will turn into energy. As the sun of Anatolia moves from east to west, it will add energy to our energy with every step. Mini YEKAs, which will enable renewable energy to spread to the base, will also pave the way for a change in investor profile and investment culture.

In order to allocate a total connection capacity of 1000 MW, a total of 74 applications within the scope of the competition based on solar energy with capacities of 10 MW, 15 MW or 20 MW in 36 provinces were received between 08-12 March 2021. A total of 709 and 9440 MW applications were submitted for 74 competitions with 1000 MWe power. 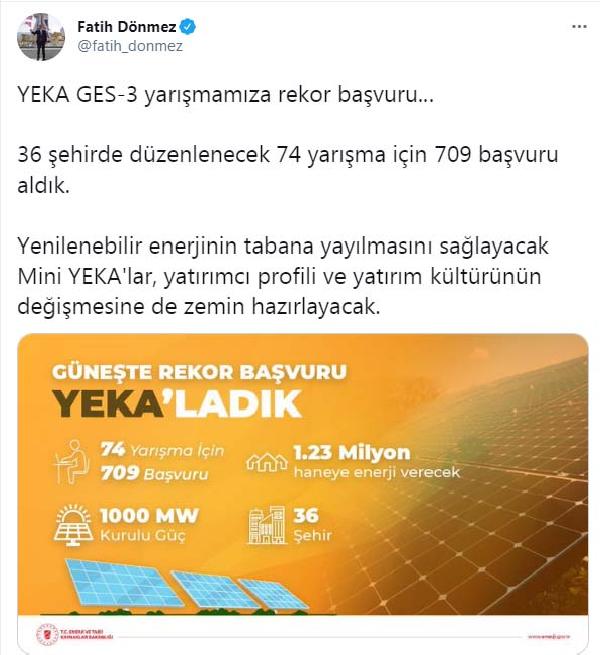