Science High School 11th grade student Artun Özsoy came first in the world at INSPO with the ‘Mobile Robot Arm’ project. Explaining that it aims to reduce injuries in dangerous and heavy work, Özsoy said, “The person will be able to control the risky tasks remotely thanks to this wearable and user-friendly robot arm.”

Participating in the International Science Project Olympiad (INSPO), Uğur Schools Gaziemir Campus Science High School 11th grade student Artun Özsoy was chosen the world champion in the engineering category with his ‘Mobile Robot Arm’ project. Artun Özsoy will represent Turkey at the International Youth Science Olympics to be held in Indonesia. Özsoy said that he has developed a simple and user-friendly project that can be used in hazardous jobs without requiring any special programming training, and said that the robot arm he prepared can be used in experiments that lead to chemical injuries and deaths by imitating arm movements from a certain distance, and that it can be used for sensitive transportation of dangerous materials. .

BOMBS CAN BE DESTROYED REMOTE

Stating that the robot arm can move in all directions in military or security requirements, Artun Özsoy said, “Today, because of the cost and use of robots require expertise, there are still dangerous work done by human power. When I saw that people could be injured and blind in chemical and biological experiments, I thought of developing this project. and in military operations carried out in the country, devices containing explosives can be detected and destroyed by this robot, “he said. 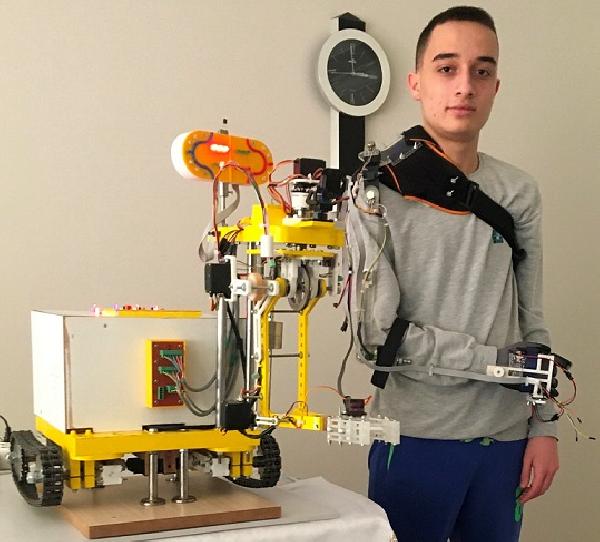 Artun Özsoy, who came second in Turkey in the 2018 TÜBİTAK Secondary Schools Project Competition and crowned her success with the first place she received at INSPO this year, said:

“I am meeting with companies to develop my project. The mobile robot arm works with wireless communication. Because it is wearable, it provides freedom to the user. In addition, open code and software controllers, which can be found very easily in the market, were used in this automation. A cost advantage was achieved by reducing license and similar expenses. Thus, I wanted to contribute to the reach of the robot arm and to its widespread use in dangerous or heavy work. In addition, it was designed as a multi-purpose automation robot that can be used in simple routine works with its ability to record movements.